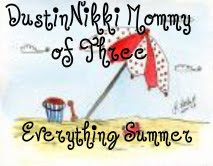 When Ryan McFarland became frustrated with traditional bikes for his son, he bought him a bike and took everything off including the pedals.  It then became pretty much like a running bike.  He really wasn’t planning on starting a company – he just wanted a bike that his son could ride without the fear or being frustrated.  He teamed up with a friend of his, Gene Woodle and his father Joe McFarland.  McFarland already had experience with dirt bikes, mountain bikes, and stock car racing. 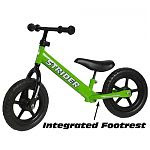 I immediately became interested in Strider Prebike the first time that I came across them.  I was given a great opportunity to work with them on a review and I have to give them a special thank you for that!  Our 4 year old son’s new favorite color of the month is green so that was the color of the Prebike that we chose.  You may be wondering from the picture what this bike is all about since there aren’t any pedals.  Well, the Prebike is a running bike or a balance bike in other words.

Now you may be wondering what in the world is the point.  Well, learning to ride a bike even with training wheels can be frustrating, confusing, and can even be scary for some kids.  Traditional bikes can tip over and focusing on the pedals are frustrating – I know it is for our son!  The point to the Strider Prebike is to teach kids balance before they even begin to learn to pedal.  Getting the balance down, makes it a lot easier for them to learn to ride a pedal bike.  They also have more confidence and less fear because if they have their balance under control, there is no need for training wheels and they don’t have fear of a bike tipping over on them. 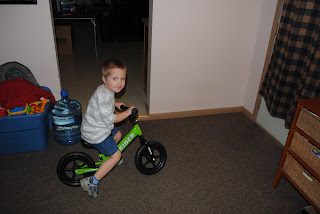 When it first arrived on our front porch, his eyes about popped out of his head.  He culdn’t wait to ride it.  Putting it together was the simplist bike we have ever had to put together.  There aren’t any pedals or a chain.  It’s pretty much a bike frame, 2 wheels, a seat and handle bars.  The only thing we had to put on was the front wheel and handle bars.  We adjusted the seat and handle bars and he was riding it throught the living room, into the kitchen and on into the dining room in less than five minutes after taking it out of the box!
He has a traditional  pedal bike with training wheels but he hasn’t been comfortable with it much since we got it.  He will get on it but that’s as far as it goes.  When he first got it, he didn’t do too terrible with it until it tipped a little and ever since then, he has been very leary of it.  With the Strider Prebike, he feels pretty secure.  He has a lot more control over it.  We let him ride around in the house for a few days until he got comfortable with it since we have a decent amount of room going from the living room all the way to the dining room.  After he was pretty comfortable, he started putting his feet up after he got it going and so off to the outdoors we went. 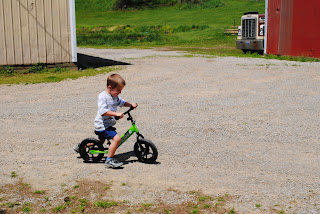 The Strider Prebike is easy for him to ride in the driveway and even in the grass.  He had a good time riding and I actually have a hard time getting him off of it most of the time.  He finally has a bike that he can ride and he’s been wanting to be able to ride one for so long.  I know that he doesn’t have a helmet on but the one that he has is too big.  I was right there with him and I felt he would be fine because this bike is a bit different than your traditional bike.  Please don’t take it that I would suggest that a helmet isn’t neccessary.  I just used my own judgement and if his helmet fit him, I most likely would have had him wearing one. 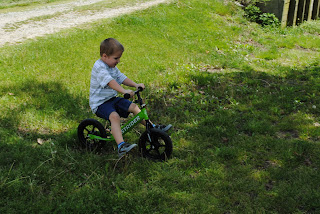 We have a slope on the side of our driveway which he discovered was fun to ride down.  He would go to the top, put his feet up and go!  For some reason he puts his feet in front of him instead of on the foot rests.  I guess he’s just more comfortable doing it that way.  He can stop whenever he wants.  He can put his feet down at any time.  There isn’t any worry about the bike falling over because he can now catch himself.  It’s not like training wheels that tip and not being able to stop it.  Or the fact that when riding a bike with training wheels, it wobbles because they rely too much on them. 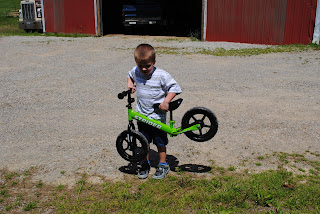 It’s also lightweight only weighing 7 pounds which happens to be 1/3 the weight of a typical bike with training wheels so even he can pick it up.  He doesn’t really need to though because he can fly around on this bike and can turn while on the bike.  he doesn’t need to get off to turn it around like he would riding something else.  The Strider Prebike has helped him greatly.  I have already noticed a big improvement in his balance only after a couple weeks.  He balances pretty well on it so I really think he’s almost there.
In about a month (maybe a couple weeks more), I’m pretty confident that we might be able to get his pedal bike out and remove the training wheels and teach him how to pedal.  Once he has his balance, I can’t see him having a problem.  After our experiences, Strider Prebike works and as a mom, I definately recommend it!  Your child can learn to ride a bike a lot quicker with less fear.  I have learned from this experience that riding a bike truly is easier when you start with learning to balance first!
The Strider Prebike is designed for kids from the age of 1 to 5 years old with a weight limit of 50 pounds.
The product was sent to me for free by the company for my use and review. I was not paid to write my review and my opinions are 100% my own.
Buy It:  You can buy your Strider Prebike by visiting Strider Bikes online.  They have a lot of different colors to choose from!

Be sure to leave your EMAIL address in your comments so that I know how to contact you if you win! All entries will be checked and if there are any comments that do not count or qualify as an entry, they will be deleted. Leave a separate comment for each entry so that they are counted correctly. For example, if you post my button somewhere, leave 3 separate comments since it is worth 3 entries.