I received an email from Daniella asking me if I would be interested in reviewing her Matooka line of clothing for girls.  Since my 9 year old daughter loves clothes, I was more than happy to.  Matooka Kids Couture is a line of little girl’s clothing by Daniella and Yona.  Both of them is one of six sisters and they are best friends with 8 daughters between them.  Since they grew up with so many sisters, fashion and clothing was the only way they thought they could individualize themselves.  I actually agree with that having 3 sisters myself.
Daniella and Yona are former lawyers and left their legal lives to launch Matooka in 2009.  Having daughters of their own, they wanted to create a line of clothing that both moms and daughters both love.  Little girls love fashion just as much as a teenager or a grown woman does.  My daughter isn’t any different.  They wanted to create something fashionable and contemporary. At the same time, still playful and sweet like little girls should be.  Below are images of a few of the Matooka Kids Couture line which can also be found on their Facebook page:
Spring 2010 Collection 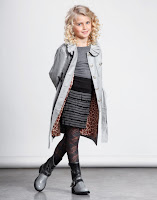 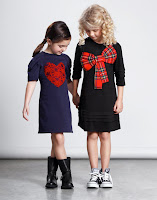 Aren’t they the cutest yet stylish outfits?  My daughter was sent their white flapper skirt and their pink scrapyard top.  When we first opened up the package, my daughter was thrilled!  She said to me in her exact words, â€œWow! I want to wear that to school tomorrow and Iâ€™m serious!â€  I thought it was cute and funny at the same time.  She didn’t have gymn that day so she wore it to school.  She came home telling me that a couple of her friends asked her where she got it because they wanted an outfit just like it.
My daughter loving her outfit! 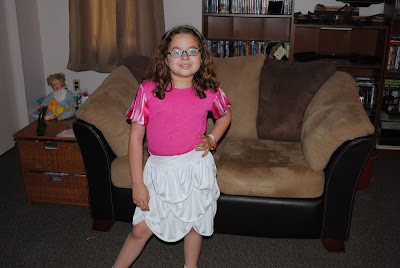 My daughter absolutely loves the skirt and adores the top.  She loves the ribbon on the sleeves.  What I love about it is that it can be worn as formal or casual.  Usually when shopping for my daughter, it’s either one way or the other but Matooka has it both ways.  I thought it looked really cute when she still wore her tennis shoes with it!

We love the detail.  The clothes are made really well and my daughter tells me that it was really comfortable to wear.  They know exactly how to detail their clothing line and make the outfit stand out great.  Care instructions for my daughter’s skirt and top says to hand wash them and let them air dry lying them flat.  Daniella and Yona know their stuff!  They definitely have little girl’s in mind when it comes to their Matooka clothing line!
Not only is Matooka a great clothing line, Matooka is also donating 10% of their profits to research in fertility and to families going through expensive assisted reproduction treatments.  This is a wonderful thing to do.  I couldn’t imagine not being able to have children after having three of my own and I wish these families all the best going through that.  I think I speak for a lot of people when I say thanks to Matooka for being so generous.
My daughter would like to say she loves Matooka and she has her own special thanks to the company for giving us the opportunity to work with them!
The product was sent to me for free by the company for my use and review. I was not paid to write my review and my opinions are 100% my own.
Buy It:  The Matooka Collection is already being sold in over 20 stores in New York, Los Angeles, Miami and Toronto.  Matooka is also sold online at Peachandplum.com and Shopbabytrends.com
Don’t forget to read about Matooka and keep up with the latest by visiting their Facebook page!
Tagged clothing, kids clothing, kids couture, matooka, matooka clothing, reviews