I remember that morning like it was yesterday.  At the time, my husband and I lived in VA.  He was in the Marine Corps and was stationed in Quantico.  Our daughter (our oldest) was just over a year old.  We were both still sleeping at 8:00am when my husband returned back from work.  I was sound asleep and woke when I heard the car pull up.

Don’t ask me how I knew it was him because I still can’t figure that one out.  It was base housing and there were lots of families living around us.  I sat straight up out of bed as he opened the front door.  Somehow I already knew that my brother was gone before my husband even told me.  Before he even said anything, I asked him which of my brothers was gone and he confirmed what I already knew.  My best friend.

Not that my other brother wasn’t important to me because he was and is and always will be.  This brother was only a year younger than me and we had the same friends and always hung out together.  We were really close.  I’m telling you what, that was the quickest trip we have ever taken home back to Ohio.  We made it home in less than 6 hours with our dog and our daughter that was still a baby. 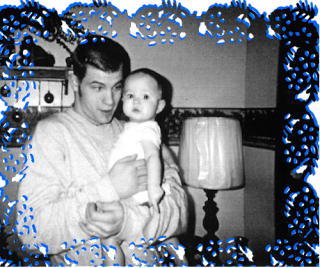 This is him with our daughter.  She was only 8 months old at when this picture was taken.  This was the last time that they saw each other and was the last time that I saw him.  He never did get to meet any of his nephews but I believe he has in spirit.  I did get to talk to him on the phone around Easter time that year.  We couldn’t make it home and I called my grandma and at the same time he had called mom.  Mom and Grandma lived next door to each other so my grandma had yelled over to tell my mom that I was on the phone and she came over still on the phone with my brother.
He wanted to talk to me so leave it to my grandma to come up with a brilliant idea.  She put mom’s phone and her phone together so that was how we talked to one another!  Hey, it worked.  Calling collect from VA got expensive!
The night he died, he was with a bunch of friends at a quarry.  They were swimming and having a good time.  Well, my brother being just like himself, decided to jump off the cliff side down into the water.  As he hit the water, he hit his head on the rocks and then he drowned.  If you knew my brother, you would have expected him to do a stunt like that.  He was a free spirit and fun loving guy.  He didn’t suffer though which gave us all peace of mind – at least as much as it could at the time.
My brother was only 20 years old when we lost him.  This was 8 years ago today.  This isn’t a sad day for me though.  I still miss him fiercely though and wish my best friend was still only a phone call away.  I made peace with his leaving us long ago, I just look at it like he just went home a little earlier than the rest of us.  Instead of feeling sad and being a day of mourning, this is the day we celebrate his life.
My life would never had been the same without him and to be honest, my childhood would have been completely different if it weren’t for him.  Oh believe me, there are a lot of stories I could tell you!  Nah, I’m not sad even though I miss him more than I can say, but I am very thankful that I was given such a great brother.  He was a good one to have and I still have him.  He’s still around.
This post is written not only in memory of my brother and thank him for the best friend that he was, but also because I want to make aware that not all quarries are safe.  I urge everyone to stay away from them.  I just saw on the news not long ago that there was a kid that drowned in a quarry (not the same one).  Please, please, please be careful around them.

I love you Bubby