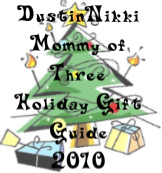 My kids love playing games.Â  They have all kinds of board games and we always try to squeeze in at least one day a week for family game night.Â  I think games are a great family activity to do together.Â  Of course they like to play games all the time regardless.Â  Goliath Games has some really great games for the whole family andÂ when I was asked to review their games I was thrilled for the opportunity!Â  I was sent two of their games – Pop The Pig and Mad Mouse.Â  Pop The Pig is Goliath’s mega hit game and Mad Mouse is one of their newest additions this year.Â  Both of them have been a big hit in our house! 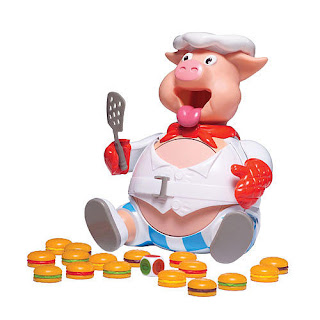 Included in this game is the pig wearing his chef outfit already looking like he is about to bust.Â  He’s actually really cute.Â  There are 16 burgers and they all have numbers on the bottom of them.Â  The burger patties are different colors and there is a die and each side is a different color.Â  To play the game all the burgers are spread out with the number side down.Â  Each player takes turns rolling the die and they pick up one of the color coordinating burgers.Â  The number indicates how many times a player pushes down on the pig’s hat.Â  When his hat or head is pushed down his belly gets bigger each time.Â  Eventually his belly gets so big that his buckle finally comes loose and the player has officially “popped the pig”!Â  If the player pops the pig, the player loses.Â

My kids think this game is really fun and hillarious!Â  I love watching them play it because as much as they are giggling, it makes me laugh.Â  Our son gets all excited when he thinks the pig is about to pop.Â  He’s got it a little backwards – he wants to pop the pig!Â  I think it’s a great game for younger kids too because it teaches them counting and identifying numbers.Â  They like feeding the pig (you actually feed him the burgers).Â  I think it’s a really fun game and I know my kids love it!Â  Age recommendations are 4 years and older due to the size of the burgers. 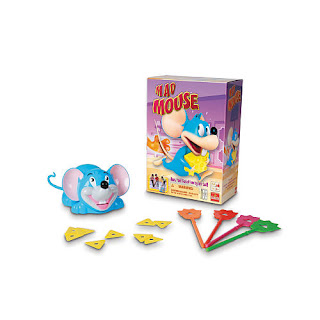 Mad Mouse is definitely mad!Â  I think my kids go a little mad when playing it!Â  Included is a blue mouse that requires 2 C batteries (not included).Â  His tail kind of makes a little hook and he holds theÂ cheese game piecesÂ in his mouth.Â  There are four “cat paws” included that kind of look like wands.Â  The holes in the middle are there to try to hook the mouse’s tail.Â  Sounds easy right?Â  Well, try catching him by hooking his tail while you chase him down!Â  Yes, you literally have to chase down the mouse to catch him to get his cheese!

This is definitely a game that gets them going!Â  It’s really funny to see.Â  I even tried my hand at it and it’s not at easy as it looks.Â  I think that’s what makes it even more fun.Â  The mouse doesn’t just run in a straight line.Â  He zig zags back and forth and turns around – moves everywhere!Â  It’s not too fast that my kids can’t get ahold of him, it’s just the way the mouse moves.Â  My kids have payed this game for a few weeks now a couple days each week.Â  If it’s the weekend, they play with it more.Â  I was impressed that the batteries have still lasted.Â  I figured they would go bad as much as they have played this game.

This game is recommended for ages 3 years and older.Â  What I love about it is that it promotes kids to actually get up to do something while playing.Â  It’s an active game and I like that.Â  We have really low or short carpet and the mouse works fine in our living room.Â  It does move a little faster on the kitchen floor though.Â  I think it’s a great game and my kids really enjoy it.Â  We make them wait to play after little guy takes his nap so that he doesn’t get in the way but he has seen it and thinks it’s funny too.Â  He went crawling through the living room like a bandit after it one day!

Both of these games from Goliath are really fun and are definitely a lot different than your typical board game!Â  Even though the age recommendations are as low as 3 and 4 years old, our daughter is 9 and loves themÂ both just as much as our 4 year old.Â  I think these games would definitely make a great gift this Christmas!Â

Buy It:Â  You can buy Pop The Pig at Target, Toys R Us and amazon.com for around $20 and Mad Mouse can be purchased at Toys R Us, amazon.com and Learning Express for around $25 – theyÂ both areÂ really terrific games!

The product was sent to me for free by the company for my use and review. I was not paid to write my review and my opinions are 100% my own.